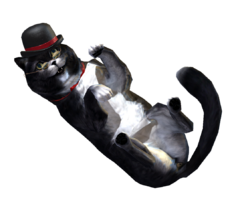 Chauncey von Snuffles III is "the runner-up in the Divinity's Reach Fanciest Cat competition,"[1] having lost to Lady Wisteria Whiskington from Beetletun. The competition was made for charity and Chauncey was the crowd favorite, but when he lost the crowd rioted against Lord Faren, who was the announcer of the competition's winner. Though the crowd thought he had some influence in preventing Chauncey from receiving first place, he did not and was just as surprised to Chauncey's loss.[2] Chauncey's fans chased Faren out of the city for a temporary "sabbatical" in Southsun Cove.