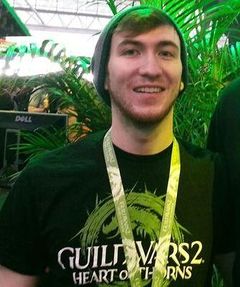 [D]uring the WvW Adopt a Dev program both guilds that I joined ended up disbanding during the event.

Branden Gee was a Gameplay Programmer at ArenaNet working on the Guild Wars 2 Raids Team. Prior to his involvement in raids, Gee was working with the PvP team for two years. His main involvements were the PvP Reward Tracks, Standard Models, March 2015 Camera Changes, Stronghold, and Mist Champions.

Branden Gee also claims credit for the previous bug where NPCs would display guild tags by their names.

Prior to working at ArenaNet, Gee worked at Microsoft, DigiPen Institute of Technology, and Nobodinos.