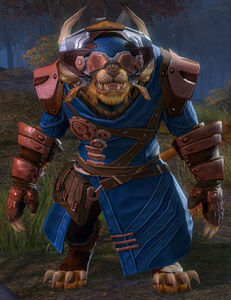 Auris Weirdbringer is a mysterious charr. He is initially encountered in Gillfarn Plains, investigating the strange rifts surrounding the pond. He himself seems similarly affected, as he teleports around the pond at regular intervals and seems to experience his interactions with the player character out of chronological order. He supplies the player with a Class I Rift Stabilizer and a Class II Rift Stabilizer.

Later, he can be found at his workshop in Blood Keep. He seems to be more stabilized within time and space here, though he fails to recognize the player character, and strange, tiny explosions will randomly spark around a broken asura gate nearby...

Before the character has been in close proximity to a Class I Magic Rift
Kinda busy here, cub. What do you want?

What are you doing?

There's something strange going on at this lake. I'm investigating.

You said something about ninety-seven.

Do you know what to make of this thing I found? (If the character has a Mysterious Device in their inventory)

Now hold on a minute, cub. You can't rush some things.

How long is this going to take?

Let's see what happens when I press this button...

Yes, let's see. (repeats from "Well that's interesting" until the device is repaired, giving a Class I Rift Stabilizer)

Never mind, I'll figure it out myself.

After talking to him and getting teleported randomly, and the character has Class I Rift Stabilizer in their inventory
Have we met? I think there's something...something strange happening around here.

I was talking to you, and we got sucked into a rift!

Hmmm... that may be plausible. But I'd have to do more investigation.

Can you tell me anything more about this device?

Why are you asking me?

Before the rift! You said you would figure out what it does.

No...that can't be right. You brought this to me, broken. Then you said that it was a rift stabilizer. I figured out how to repair it.

Assuming that actually happened, why would I be using this?

You use it to stabilize the naturally occurring rifts, of course. Though I haven't the slightest idea why. Come back and tell me if you figure it out.

You do that, then.

You do that, then.

After the character teleported to each of 13 locations using the Class I Rift Stabilizer and jumping in a Class I Magic Rift
All of these animals are dead... that can't be good.

I think the rift stabilizer is damaged. It only brings me here now.

Well, I don't know what a rift stabilizer is, but I recognize the tech. Maybe I can fix it.

There you go. Even made some improvements. (receive Class II Rift Stabilizer)

(He's too busy to acknowledge your presence.)

If the player character has a Class II Rift Stabilizer in their inventory
Who are you?

You've always called me cub, but...

I like it, but listen, cub. I'm busy right now.

If player character has a Class II Rift Stabilizer in their inventory and stands in the broken portal
What are you doing?!

I don't know, but this device is buzzing.

Well, knock it off.

The dials are stuck on nine and seven.

I don't care about ninety-seven. Just make it stop.

Greets
I'm listening.
Make it quick.
The legion calls.
What?
You want something?