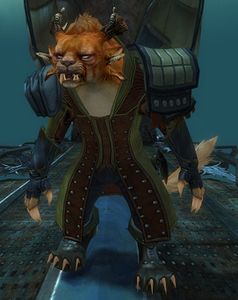 Arda Gyreshriek is a female Iron Legion charr piloting helicopters on behalf of the Pact. She wields a sword and pistol and used to run missions in Diessa Plateau at Blackblade Lake before leaving to help the Pact take down Zhaitan. After her airship crashes in Orr following a key delivery, the player and Laranthir of the Wild search for her on Winterknell Shore discovering clues to her her location. She is found alive but badly injured and fighting off Risen, and succumbs to her wounds shortly after being found but not before learning that the mission she helped with was successful.