Is this point of interest the same ogden stonehealer from guild wars? AboveAverageJoe 00:59, 3 September 2012 (UTC)

To be confimed findings;
Reapers Gate PoI is the old Grenth Temple, but not the same entrance and layout.

Maw's Rise PoI is the corpse of Maw the Mountain Heart.
Dwarves' Gloaming seems to be on the approx. area of old Camp Rankor.

Camp Rankor is actually much further south from Dwarves' Gloaming. As we know, Sorrow's Embrace is the exact location of Sorrow's Furnace which is just northwest of Deldrimor War Camp. Using that as a place marker I'm putting Dwarve's Gloaming somewhere in the southern portion of Dreadnought's drivft. I'm having a really hard time short of logging in to GW1 to find any Dwarven attachment to this actual location. I'm also pretty curious about the climate change in the area. Htims 14:48, 8 January 2013 (UTC)

Not quite. We were told outright in an interview that it was due to the volcano defrosting the snow, as shown on Steamspur Mountains (I suspect that the areas also take place in Spring/Winter, given Wayfarer Foothills' defrostiness). Konig/talk 17:05, 8 January 2013 (UTC)

The Windy Cave point of interest also contains a jumping puzzle; however, it's short and most of the challenge comes from fighting the veteran and normal shadow imps and translucent oozes. It does contain a chest at the end of it.173.88.250.197 06:49, 12 September 2012 (UTC)

Yeah, I don't know how to call this. It is a little bit of a jumping puzzle and a little bit of a very mini mini-dungeon/tomb thing (with that veteran as a kind of end boss). It has a Splendid Chest on its end, but no exporer achievement. So it's a little bit of everything and nothing. Balwin 08:58, 12 September 2012 (UTC)

@Zerebruin: I didn't see a chest. I misread the IP's comment as a question if there's a chest at the end. Odd others see such. Anyways, I'd call this a mini-dungeon (no one said they all had to be the size of Flame Temple Tombs), as all jumping puzzles are mini-dungeons (well, most - some are just puzzles requiring jumping to get to skill challenges or vistas) and jumping puzzle is usually synonymous with "has an achievement" in GW2. Konig/talk 17:47, 12 September 2012 (UTC) 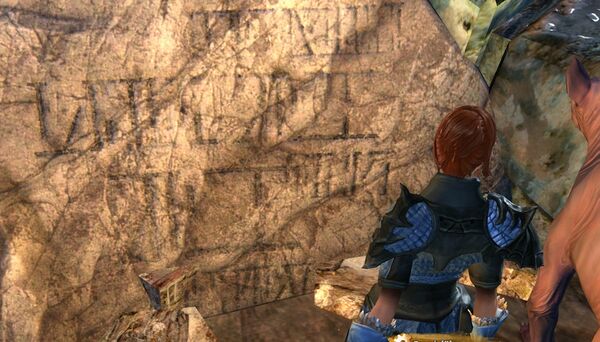 I don't think we can read this, but this is interesting. This is on a broken wall inside a cave with some spiders. It's looks like it might be dwarven runes, or maybe it's some other ancient language. Minara 09:21, 21 September 2012 (UTC)

The signpost you linked to is norn runes. But interesting find. Without a wider sample though, I doubt we'll be able to translate - if it can be. We were told that there's a "mystery" language left that's translatable in GW2 (out of 4 - Ascalonian, New Krytan, and Asuran being the other three). Konig/talk 08:56, 21 September 2012 (UTC)

A new one was added in the last update, the waypoint is already in the article but someone forget to update the number. It's updated now--W.Wolf (talk) 23:03, 22 January 2014 (UTC)

Think the new WP is at "False River Valley". The map/image for that region is no longer correct...