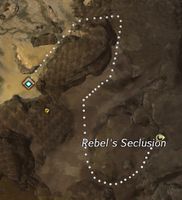 The entrance to the area is northeast of

Breaktooth's Waypoint — . Look for a cave entrance guarded by Separatists.

Head Northeast along the wall until you reach some pillars and an opening. (You will pass a shallow cave) Head between the pillars East and then Southward. There will be Separatist fighters along the way. Eventually, you will encounter Ascalonian ghosts. Walk around the corner and start heading North, up a short hill, until you see the Splendid Chest guarded by a Veteran Ascalonian Enchanter. The Achievement is credited upon reaching the chest. It is not necessary to open it.