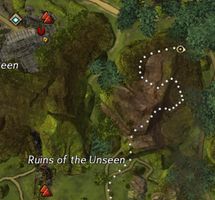 Map of Don't Touch the Shiny

The skritt cave with Orb on the right and "door" on the left.

Don't Touch the Shiny is an Explorer achievement and mini-dungeon in Caledon Forest.

The entrance to the mini-dungeon is north of

Mabon Waypoint — in a skritt cave in Ruins of the Unseen (the entrance is above the last "n" of "Unseen" on the map).

An electrical orb lies on a pedestal to the right as you enter, and a "door" made of multicolored metal sheets can be found on the left side of the cave. To enter the sealed room, grab the orb and use the skill it provides you at the door. If you have not killed the numerous and fast-respawning skritt in the cave before attempting the door, and you have auto-targeting enabled, you should face the door and press the forward key while using the orb's skill, otherwise you will throw the orb on a nearby skritt rather than the door.

Beyond the door is a chamber with several peaceful Eye of the Unseen golems and a Splendid Chest that can be opened safely.

To get the achievement, interact with the Sacred Skritt Shiny in front of the chest and select the response with the crossed swords to break it. Doing so will cause all the golems to become hostile and attack you, and it will also cause some electrical currents to flow down from the ceiling at intervals, making some areas unsafe to stand in. The space behind the chest is safe.

There are 10 golems in the chamber, all level 15, while you will only be level 13, making this a potentially difficult fight. They can be pulled in smaller groups if you run to fight behind the chest after breaking the Shiny. Alternatively, players can avoid the golems and simply run out; killing them is not necessary to get the achievement.