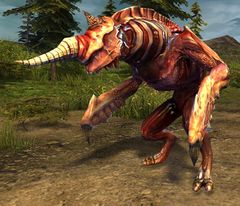 Dhuum's Messengers follow the first person to attack them after they spawn. Once attacked they get an effect called Imminent Demise which automatically kills them after 15 seconds. Dhuum's Messengers do not attack players, but instead have a heavily damaging aoe around them, quickly downing and killing players affected by it.