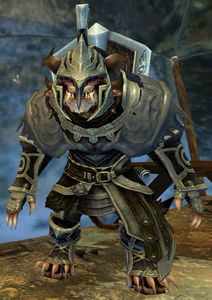 Crusader Barbus Blackpowder is a member of the Vigil transporting mortars to Murkvale to cull a Risen horde. He appears to be in command of the mortar team, answering only to Warmaster Dalia Caisson and the Pact Commander, and takes care of the mortar team's logistics. However, in the heat of battle, he focuses more on his team than the enemy, stating that the first rule of artillery warfare is, "There's no kill like overkill." When things go wrong, he blames the Pact Commander for the mistake of firing on friendly troops.