Talk:Raven (Spirit of the Wild) 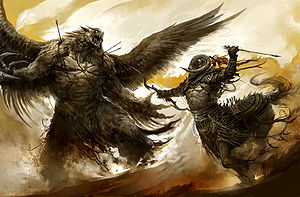 Well I found this on trailer; Should I put this on the page for now? --

Speculation shouldn't go onto articles - let's try and stick with known facts. This particular one is unlikely, anyway - other than having wings, I'm not sure how this resembles a raven. --

I'd expect it to resemble a raven. --

It looks more like an owl, than a raven.

The image is not necessarily a raven shaman, it was just presented in an article that included the shamans. For all we know, that could be a player armor, or pretty much any norn armor. I'd say remove it due to speculation. --Tuomir 19:43, 26 February 2011 (UTC)

The official site labelled it as such, and therefore there is no speculation applicable. - Infinite - talk 19:37, 26 February 2011 (UTC)

I've looked everywhere I can think to, but I haven't been able to find who voices Raven in The Invitation instance. If anyone happens to know please do inform me.~Miss Lana (talk) 11:39, 21 November 2019 (UTC)