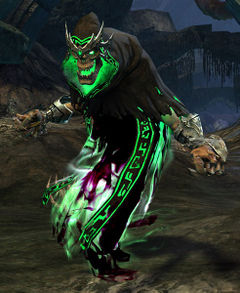 Champion Nasir Al Tineen is a powerful Risen that was found in Orvanic Shore during the GamesCom 2011 demo. He was located in the Tower of Modius, from which he could not appear to leave. He also appeared to be invincible because he regained all his health when it reached a certain threshold and knock players back while saying: "I've had enough of these distractions! Shoo!" [1]

Nasir appears to have been replaced by a generic Champion Risen Lich which appears during Destroy the champion Risen lich from the crumbling Tower of Modius, with the aforementioned interaction removed entirely.