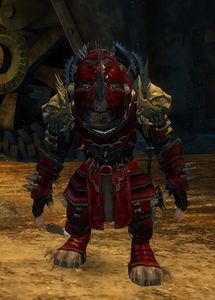 Britna Couragemind is the scout for the Sati Passage, Fuller Cistern and the Pig Iron Mine areas in Fireheart Rise. She is located a short distance south of Sati Waypoint.

We fight every day just to hold Tuyere Command Post and maintain solid footing in this region. We have to deal with direct assaults, as well as hit-and-run raids. Tar in our cistern puts off gas tthat harms the troops, making them weak and listless. We also have an auxiliary camp to the west at Severed Breach, but our control there is tenuous. It's a daily struggle, but someday we'll extinguish the Flame Legion, once and for all.

You have my thanks, <Character name>. Tuyere Command Post will continue to stand as a bastion against the Flame Legion.

Glad I could help.

Greets
After completing all associated Renown Hearts
Thank you for your help. You're a true asset.