From Guild Wars 2 Wiki
Jump to navigationJump to search
Stub. Key elements of this npc article are incomplete. You can help the Guild Wars 2 Wiki by expanding it.
Reason: stolen skills, and heart involvement 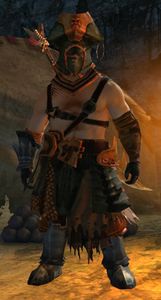 Veteran Mutinous Pirate is a member of the Crafty Corsairs who is provoked while the event Free an Order of Whispers agent from pirates is active. Before turning on the Veteran Crafty Corsair Captain, the mutineer is known as Veteran First Mate.

Free an Order of Whispers agent from pirates (49)

During Free an Order of Whispers agent from pirates
Spill it. I'm in no mood or chattin'.

Yeah! This filthy hole we're squattin' in. We need to get out to sea. For pillage and plunder! That's the pirate way!

So what are we doing in here? Let's go!

Arr! But cap'n says it's not time. Word is he's plottin[sic] something big.

Maybe he's just a coward. Maybe you should do something about it.

Like what, mutiny? Harr, half of us is too loyal. Besides, Admiral Taidha don't look too kindly on mutineers.

So kill the loyal half and lead your own crew! Think of the plunder!

Yarr, with half the crew dead we'll get twice the booty! Let's get started!

Ah, but loyalty means so little when lying with the wrong leader.

Tis[sic] true. Our loyalty should be with Taidha! And how better to serve her than by getting rid of a yellow-belly cap'n?

That's just what I wanted to hear!

I think you look like a far better captain. Surely Taidha will as well.

Yeah, forget I said anything.