Edit Conflict [wiki] is the one and only Guild Wars 2 guild for wiki users endorsed by the GW2W admin team. Unless some of the admins endorse another. In which case they're probably fired.

The guild's primary purpose is to have an in-game method for wiki editors to coordinate and work together to help document the game, and also generally have fun together.

Anyone who accepts the above core goal and follows the rules. Editors, of course, but also lurkers who want to help out in an in-game way, and even editors' non-wiki friends are welcome to come along, as long as they accept that the guild's culture is primarily a wiki culture.

If you are bringing friends along, bear in mind that their behavior reflects on you, so if you bring along three friends who are all a constant disruption to guild chat, at best you don't get to bring any more friends, and at worst you may find yourself kicked right alongside them, even if you're not that bad yourself. Also, try not to go crazy with it. If you want to bring along 50 non-wiki friends, it may be better for you to start a side-guild for them, and only do the wiki guild part-time.

Requirements may tighten up if the guild population explodes beyond all control.

One additional caveat: If you're permabanned from the wiki, you're not invited to the guild. Let's face it: it takes a lot of effort to get permabanned, and by the time someone has, they've proven they're unable or unwilling to work with the community non-disruptively.

The number one rule is that no one is to ever give a guildmate crap over stopping to document something. We're a wiki guild first and foremost, regardless of how much of a rush you may be in to get to the end of the dungeon/whatever.

You're explicitly not required to make the wiki guild your "primary" guild. There are no formal participation requirements; as long as you join in (or at least make yourself available) from time to time, that's fine. Whether you do PvE, WvW, PvP, or some combination of the above, totally up to you.

Act mature. Your real age does not matter; the level of maturity you display does. Again, we all know whether you are or not.

No homophobic or racial/ethnic slurs, or really slurs in general, on guild chat. I don't care if you don't mean it as a slur, and I'm not going to get into a debate with you on evolution of the English language. Not on guild chat. Period. A sprinkling of plain old profanity's fine, but keep it within reason.

If you get kicked for whatever reason, you can appeal to me, or to anyone else with Leader rank (currently Pling). If that appeal fails, you're done. Officers will not do appeals, except that the kicking Officer can reinvite if it was an accident or if it turns out they were mistaken. Officers who build up a history of kicking unfairly will be removed from the Officer rank.

Officers will be promoted on the basis of who I and the other Leader(s) trust. It will probably mostly be wiki admins, but adminship is not a requirement to be a guild officer, nor does adminship guarantee being made a guild officer.

While people are free to join no matter what home server they choose, the main server where things happen is Yak's Bend in North America. There are also a few active members on EU servers, largely centered on Desolation. Of course, with Megaservers now, the only thing you really need to be on the same server for is WvW (which we don't do terribly much of besides dailies and tournaments), though unfortunately the NA vs EU divide remains in effect. 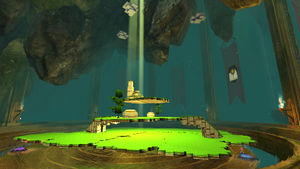 We have claimed Gilded Hollow for our guild hall. We have maxed tavern buffs, all the buildings restored and Further Exploration, as well as various other little niceties like a Guild Portal, maxed out synthesizers, Guild Trader 5, a bunch of the cheaper scribing recipes, and such fun stuff. As of this writing, there aren't really any upgrades left that we're working on as major goals, but if there's something someone still wants, let me know.

We have gone slightly crazy with SAB decorations (NOW WITH SAB MUSIC) and other decorations in general, in the best ways. Look around and see what we've done. Or take a peek at the screenshot on the right for the madness we've done to the arena.

All members have the mission control privilege, which means anyone can start any guild mission at any time. If you see one you want to nab for personal credit for the week, go for it.

The raid team is on indefinite hiatus unless/until we manage to rebuild a full team of 10 who can reliably commit to a schedule and to putting in the work necessary to learn the bosses. In the meantime, I've left the 'What is Raid Ready' section intact, and also now have a full-featured guide to gearing up for anyone thinking about getting into raids, whether with a [wiki] group, their own group, or PUG'ing.

So the first thing is you need an ascended weapon. You might need more, depending on to what degree your class uses their offhand and/or secondary set, but at the very least your primary mainhand needs to be ascended. Your damage will just be so much less without one, and we have a timer to fight.

Your trinkets should also be ascended (backpiece, earrings, amulet, and rings), as this is where most of your stats will come from. Full 80 exotic armor is minimum; ascended armor is nice, but not crucial.

Speaking of stats: unless you're the tank or the healer, you shouldn't have any toughness on anything you're wearing/wielding. Basically, if you're a power build, everything should be power, precision, and ferocity (not necessarily in that order as there are certain builds that mix in some Assassin's to top off crit chance, but if you're not sure, assume Berserker stat), and if you're a condi, you want enough Viper's to reach 100% condi duration with food for your top damage conditions, Sinister for the rest. Again, the fights are all on a clock, so the damage dealers need to maximize their damage. I know it's scary to not have toughness and vit, but we have a healer, and the significantly damaging things all have tells to warn you to dodge.

For most classes, you're also going to need the elite specialization fully unlocked.

As for specific builds, you can look up on Metabattle, Reddit, forums, etc, or just ask us. If you need a little help getting geared up (need a rune or sigil crafted, short a few commendations or relics for the right ascended trinkets, could use some extra hands putting together Mawdrey, whatever), let us know that too and we'll try to help out. Most builds also have a recommended food: again let us know if you need help with it, or we may be able to recommend a cheaper alternative.

This is drifting into a tangent, but this is important: communicate honestly. Don't claim you're full-ascended if you're not. Don't claim you're running one build when you're running another. If you prefer running X trait over Y trait, explain why, and listen to the raid leader if they think that's a bad idea. If you're scheduled to run and can't make it, let the raid leader know as soon as you can. If you don't understand something, ask. No one will bite you.

If you want to join the guild, you can leave your display name (remember to include the numbers at the end, e.g. DisplayName.1234) or a character name on the talk page here, or whisper me or an officer in-game with your wiki username, or find some other way to contact me or an officer. If you want to bring some off-wiki friends, give me some explanation who they are (e.g. your brother, your girlfriend, this guy you did all of Prophecies with, whatever), and their display name too. Make sure they read and understand this page first.