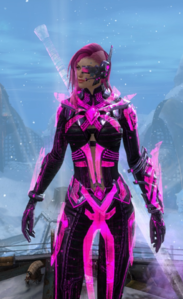 I've been around for years in the main german GW1 communities Wartower and GWCom (former GW-Tactics) where i mainly discussed teambuilds and tactics. I have a decent knowledge of anything PvE related and helped a lot of people getting things done there but i was never really interested in PvP. In the past i didn't do much on the english wiki, but i've been pretty active in the german one where i've created a lot of articles for crafting items and recipes, reported a lot of translation errors and did stuff. Nowadays i'm mostly on the wiki discord, occasionally ranting about things or posting (more or less) wholesome stuff, and i'm an editor for the API namespace and also widget editor.

Oh hey, this pull request of mine not only added sector boundaries to the API, but also brought you colored sectors in WvW ingame. Sometimes it's the little things...