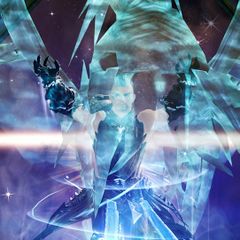 Gannon Mistward has had to overcome many obstacles and hardships throughout his life, such as the loss of his younger brother. Through it all he has gained a singular purpose, to protect those unable to defend themselves.

Born onto the streets of Divinity's Reach, Gannon has lived a life full of trials and tribulations. As a young boy, he was forced into thievery just to keep his little brother and himself alive. However, when his younger brother was murdered by a vengeful gang, Gannon swore never to commit criminal acts ever again, and only to protect those unable to defend themselves.

In his early teens, this newfound purpose in life led him to the seraph, where he began training in combat and medicine. It was during this time he found order and discipline, as he had not known either in his youth. As he grew older, Gannon found he had quite the talent for combat, due to his muscular build, and agility from his thieving days.

At the age of 19 Gannon was promoted to lieutenant, and was sent to protect the Eldvin Monastery. He watched over the grounds for many months, fighting off the occasional Tamini scout or bandit; otherwise it was a pretty peaceful post. He helped weed and de-grub the vineyard, drank wine with the priests, and watched the stars dance overhead from straw rooftops.

However, the calm would not last. One fateful night, Gannon was strolling through the grapevine when a soul-shattering shriek emanated from the Godslost Swamp. Mysterious voids opened in the center of the monastery grounds, spilling out horrendous fiends and fleshreavers. He had never fought such beings before, but he did not hesitate to protect his post. With the help of some holy fire, and his companions in arms Brother Vince and Gellan, the ethereal monstrosities were vanquished.

Despite this minor victory the shrieking only grew in intensity, and a darkness began to loom from the epicenter of the swamp. For the first time in his life Gannon was frozen in fear, for the entity he faced was not of this world. It was at this moment when Brother Vince placed his hand on Gannon's shoulder, and announced "Stand your ground, for Kryta and it's people." Shook from his stupor, Gannon knew what he must do. Rallying all the reinforcements he could muster, Gannon led the small party into the swamp.

It was a harrowing battle, and the shadowy behemoth would not be defeated so easily. As soon as they thought they were gaining ground, it would rip open otherworldly portals with its wail; summoning hoards of shades and skeletons. After what seemed like an eternity, the behemoth finally let out one final screech, and was sucked into the center of the swamp. However, as its' final act, it grasped Gannon with a massive spectral claw and pulled him into the collapsing void.