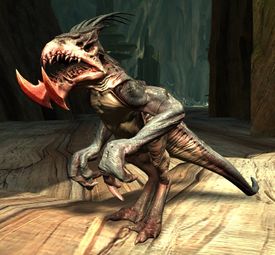 Cave Beasts are a recently discovered reptilian species found living in the Crystal Desert and the Heart of Maguuma. They make their homes inside ruins, caves, and other darkened areas within the jungle depths and desert caverns. They are also often found alongside Vampire Beasts due to shared habitats.

Cave Beasts have thus far been seen in two varieties: a darker-skinned screamer whose screams are loud enough to destabilize the cave ceiling, and a glowing spitter which has poisonous saliva.