...it has become the evolved strategy on Live.

This is a guide on solo blocking wurm projectile attacks as an elementalist. While it is written with Cobalt in mind, the theory and techniques here apply to all wurms. Emphasis is placed on learning, understanding, and improving, not obtaining results.

Understand the wurm attacks you will be responsible for neutralizing. The names used here are what they'll be called in the rest of this document.

Note: the combat log will describe projectiles as being "absorbed". In this document, I will refer to them as being "blocked".

All of this needs to be done within a few seconds. Familiarity of this sequence will gradually happen over time.

These are the skills you'll be working with:

Feedback (not the Mesmer skill)

When you successfully block a projectile, you will be notified in two ways:

One or both of these should be used to determine which attack the wurm used. It is not recommended that you look for actual projectiles, because you cannot distinguish between a husk or egg attack when all projectiles are successfully blocked. 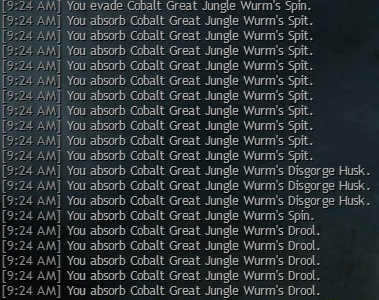 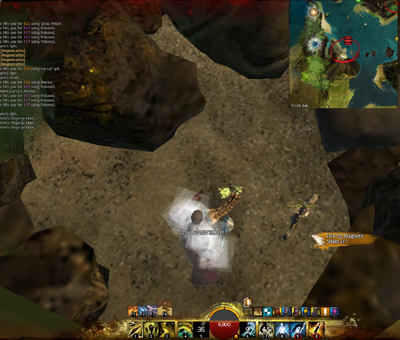 Proper positioning when facing the cliff at Cobalt. Click for larger image.

Successful blocking requires you to stand at a specific location. When starting out, it is not uncommon to miss some projectiles because they have slightly different points of origin. Despite that, there exists a location that will allow all projectiles to collide with you. Learn to quickly find this spot and plant yourself there.

For consistency, I recommend always facing the same direction. When zoomed in, use the two boulders sticking out as reference points. Resist the urge to repeatedly zoom in and out to readjust your position.

When starting out, you may be tempted to move left-to-right to follow the wurm's attacks. While this may be safer, you will end up learning the correct position slower, so I don't recommend it. Moreover, this technique does not work with Fortify.

The shield auto-attack chain will alter your position. Specifically, the second attack in the chain Shield Smash will move you towards your target. If you have an enemy targeted, you risk being moved out of position. Never have anything targeted while blocking.

During a burn phase, resist the urge to move if you don't need to. It will be harder to be ready for the next attack with all the skill effects and player models centered on the wurm.

Blocking spit is easier than blocking husks because that attack has a very small duration, so I recommend starting out trying to block that first. Work towards blocking entire husk volleys afterwards.

Practice and Improvement
Words can't really describe the precise moment to activate your skill. You could watch a video to "know" the right timing, but you don't become better at execution. Practice is the only way to master this. While there is no shortcut, here are various tips I've picked up along the way.

Once you've mastered blocking each attack individually, the last step is to learn to schedule your skill activations so you can block (nearly) everything. At this point, you should already have a good sense of:

To solo block, you need to keep a mental model of the wurm's skill cooldowns. This allows you to stop "reacting" to possible attacks and start knowing what will happen next. In doing so, you no longer need to "save" skills in anticipation because you know exactly what the wurm is capable of doing next. To accomplish this, you need to be able to block without giving it much thought. Movement and skill activation should be muscle memory.

I use two systems for tracking the wurm's attacks. I don't claim they are either the easiest to learn or the most efficient. They are simply what I developed.

This works based on a simple principle: Since your Swirling Winds cooldown (30) is less than the egg attack cooldown (45), it will always be ready to block eggs. You follow these simple rules:

Update 6/23/15: After the core specializations update, which introduced Geomancer's Training, there is a lot more freedom for scheduling blocking skills. Specifically, it is now possible to block every single projectile attack from Cobalt.

This method is based on a simple concept: While Cobalt has 4 attacks with different cooldowns, there is very little randomness to its sequence of attacks. This method attempts to reduce the uncertainty by keeping track of attack patterns over a longer period. 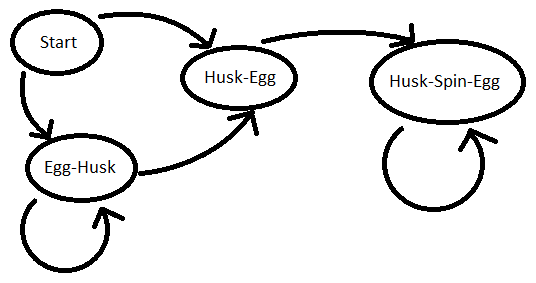 And here's how to treat each attack cycle:

Wurm skill priority and its effect on determinism
The wurm uses each skill as soon as it can. When multiple skills are available for activation, there is an activation priority. The egg and husk attacks have equal and highest priority. Spit is next, followed by spin. This is why there are situations when either Egg-Husk and Husk-Egg can happen: both skills are ready to activate, and one is chosen randomly. This is also why the wurm's attacks are so predetermined by its initial choice of attacks.

Why method 2 was developed
Ignoring spit attacks, the main difficulty in blocking both eggs and husks is that their attacks are indistinguishable. Moreover, when both attacks are ready, either one can be activated. The need to discern them was what led me to develop method 2: the uncertainty of the next attack becomes drastically reduced.

Applicability of method 2
If a burn phase triggers at the right moment and husk/egg attacks recharge sufficiently far apart, it becomes easier to know which attack is coming next, and method 2 is no longer worthwhile.

Method 2 should be easily adaptable to Crimson and Amber. In fact, since their projectile attacks have a longer cooldown, I believe it will be easier to block everything

These are intentionally imperfect sessions, as they are more illustrative of how to react to different scenarios. Includes misc. commentary.

Thanks to Eilus for general feedback.