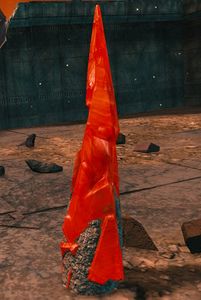 Unstable Bloodstone Shards are large pieces of bloodstone found during the Living World Season 3 story step Confessor's Stronghold. They will zap the player with magic, draining endurance and reducing attack speed unless reflected with the Counter Magic mastery. If reflected, the beam between the player and the chunk will drain the Defiance bars of any foes caught in between and grant players an increase in attack speed. They are the larger variation of Unstable Bloodstone Chunks.

The Shards can be encountered a total of three times during the course of Confessor's Stronghold;

Section-stub. This key section of the article is incomplete. You can help the Guild Wars 2 Wiki by expanding it.
Reason: Name of beam skill