Easy way to kill the blue champ ooze if you want to. Pull out a ranged weapon and stand at max range. For some reason he doesnt seem to be able to move and at max rifle range he couldnt attack me either. Would occasionally summon an add on me but that was all. Blackout15 06:28, 14 November 2012 (UTC)

Just tried this with a longbow, still works :P (Corpsecontrol) 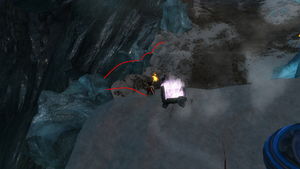 The series of jumps that gets you there. Hopefully unseen.

An alternative set of jumps which requires swiftness.

Your tip for where to land without drawing the ooze's aggro is great, but I couldn't get your jumps to play nice within a few tries - however I found my own set that work nicely with swiftness (though I couldn't make them without the boon over several attempts):
At the end of the paint-streaked rock there is a tiny ledge which can be jumped onto, then round to another ledge at the same level, and a further (slightly longer) jump to a fairly long ledge. Applying swiftness before jumping from the edge of this, you should be able to reach the icy ledge next to the chest platform. Ch8ese 22:33, 7 May 2013 (UTC)

07/22/13 Giant Ooze seems highly mobile, able to drag me toward it and AOE me away as well. It is very interesting to watch, sort of reminds me of a lava lamp. Disable slows it down, so you can easily pull it away from the chest,(it chased me all over the room) disable it, (or set a pet on it, hit it with illusion or minions) run up to the chest platform (no jumping necessary) get your chest and leave through the convenient cave mouth. I had to kill as I went as I didn't bring a sprint but with some pulling and grouping it was very doable with a solo ranger, a low impact pet and trapping.

11/27/14 Solo with human mesmer. Killed everything, including the champion, all I needed was Phantasmal Warlock and Defender with a help of the Mistfire Wolf twice, if you get down try to kill the little ones.

5/9/14 If you climb up the icy part of the ramp up to the boss, and jump from the highest point to the edge of the chest platform, you should be able to get the chest before he finishes channeling his first move (That golden glow thing). Just another way to get the chest. Willgtl (talk) 03:20, 10 May 2014 (UTC)

04/24/15 This Ooze moves really slow. I kited him down the ramp and then used swiftness to speed up to the chest, loot, then leave the cave.

Jump into the cave, almost right next to the final chest from outdoors with Springer.

No Giant Blue Ooze, only regular Blue Ooze at chest[edit]

Just noting that it's a regular labeled "Blue Ooze" which when killed does not complete the event. You can still loot the chest. --Life Infusion «T» 21:52, 17 January 2019 (UTC)