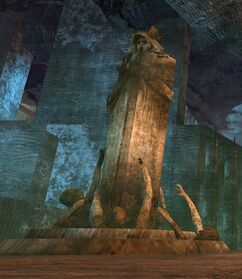 Bore Lynch statue. Are those horns on its head?

A large statue can be seen of a very tall person or god (?) having a severe if not evil look, and what seems to be strangely twisted, long and pointed horns, wearing a robe and hood, with humans half buried beneath him/her with their arms outstretched towards him. It seems it was a fountain with water coming out of the person's mouth. There are also leaves here and there on the statue, as if it was transported down there, or that there once used to be plants where it stands.

There's also a chain somewhere on the floor which seems to imply it was used to chain norns in this area.

It's an ancient statue of Grenth (yes, I'm linking to GuildWiki because GWW doesn't have a good picture of it). —Dr Ishmael

The border between this region and Groznev Delve is somewhat confusing. I moved Rebel Isaak and Rebel Alexsei over to that region's allies and removed them from Bore Lynch because they technically live on the Groznev Delve side of the border. --Keirion 20:34, 2 March 2014 (UTC)