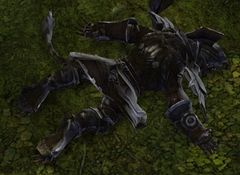 Ten bodies of fallen pact soldiers are scattered around Spirit Vale. Interacting with them for the first time allows you to collect the soldier's tags for the achievement Closure.

Section-stub. This key section of the article is incomplete. You can help the Guild Wars 2 Wiki by expanding it.
Reason: Variance in lines race/class based? See edit section and please record if it doesn't seem race/class/gender dependent.

[verification requested] Note: the bodies of the fallen soldiers are ordered as you encounter them from the entrance of the raid wing to the area just beyond the Abandoned Outpost. Their description is the hint the fallen soldier is associated with for the Closure achievement.

Under the windswept trees.

Near the fallen tree.

In the shade
<Character name>: Crushed... Did a storm blow these trees down?

<Character name>: Crushed. What a way to go. I wonder what knocked these trees down? A storm?

This soldier was killed before he could draw his weapon.

There are several rough sketches on a piece of paper. They appear to resemble pylons or obelisks.

Backed into a corner.

Prior to collecting a soldier's tags
Another casualty of war. A Pact soldier tag lies on the ground nearby.