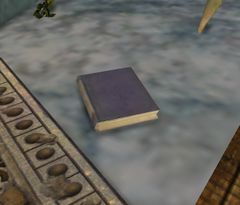 Discarded Legendary Relic Concepts is a book of outlining various discarded concepts for legendary weapons. It is found on a ledge just under the stairs leading up to the right from the first mezzanine in the Grand Causeway.

(This appears to be a list that Zommoros wrote about ideas for legendary weaponry and other relics. There are many scribbles and crossed-out items)

Idea: A sentient, living rifle that shoots skeletal fists. Can talk to its owner, as it is sentient and made of organic material.

Prototype: The Living One does nothing but scream in agony, fully aware of the futility of its existence. Not sure why I let it feel pain. Don't think I'll pursue this one.

Idea: A dagger imbued with powerful camouflaging magic and the ability to create three cloned versions of itself that fly in midair around its owner and attack all perceived threats.

Prototype: Apparently I didn't think through the ramifications of having three invisible knives floating around my person at all times. The "perceived threats" bit has proven especially problematic, as any skritt that approaches with a question gets chased off by invisible knives. This is not conducive to an appropriate professional atmosphere. Going to call this one a lost cause for now.

Idea: An ultagreatsword that splits into two separate normal greatswords—one per pair of arms.

Prototype: Two problems, actually. First, I forgot that while djinn have four arms, our target demographics tend to only have two, so they can really only wield ONE greatsword. Second, and perhaps more importantly, an ultragreatsword weighs a lot. And by "a lot" I mean the test subjects were falling onto their backs, pinned to the ground by the immense weight of the Duoblade, flailing around like a flipped tortoise. Funny, but impractical.

Idea: a focus that takes the form of a living octopus, held aloft by the creature's actual functioning tentacles!

Prototype: This worked—kind of. The problem was that everybody we tested this with got very uncomfortable having a magical, writhing octopus wrap itself around the wielder's arm. There were also at least two cases where the Cephalocus tried to eat its wielder, which focus groups described as "not ideal" and "absolutely terrifying." I'll stick a pin in this one for now.

Idea: A staff that syphons expended life energy from defeated foes, creating a gorgeous aura of light around the weapon.

Prototype: As I've said many a time, magic is not an exact science. I believe it's possible I missed something in my initial formulas, as the staff seems to be syphoning the life energy of the wielder instead of the defeated enemies. Immediately upon touching the Syphon Engine, my testers would feel weak, then collapse into a coma. Focus groups rated it very poorly as a result.