Example of WvW Battle with Culling On

Example of WvW Battle with Culling Off

When a player character moves through the game world, any character (other players, NPCs, monsters) within a certain radius around the player (visible range) gets reported to the player's game client. This lets the game draw those characters, allows the player to select them, shoot at them, etc.

Culling is a network design used by ArenaNet to limit the number of characters within visible range that are reported by the server to your game client. Once reached, this limit results in only the characters/NPCs closest to the player being reported to the client. The aim of this limitation is to:

Although achieving these aims, culling has led to numerous problems due to nearby players and NPCs becoming completely invisible. While this is considered a problem throughout both PvE and WvW, it has been a particular problem within WvW, where the number of players during many battles is considerably larger than the chosen limit, resulting in numerous enemy players not being visible to opposing forces.

Removal in World vs. World[edit] 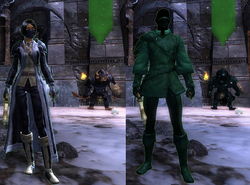 Culling has been removed from WvW in the Flame and Frost: The Razing release on March 26, 2013. WvW players are now expected to control the load on their systems in order to attain acceptable frame rates, by introducing limits themselves, using two new graphics settings:

Culling was observed to gradually increase in the PvE areas since the game's launch. The current observed limit is around 30 friendly NPCs and 12 monsters.[verification requested] As distant characters come closer, their bodies become visible some distance before their nameplates appear. Visible, but distant characters and monsters cannot be selected until they come within a minimum distance.

As you move your character in a direction, new characters/NPCs will gradually appear into the scene (taking a few seconds) while those behind you disappear. This gradual apparition was one of the issues affecting WvW stealthy characters, and providing them with a few seconds of extra invisibility as they came out of stealth.

Culling in PvE was removed with the Clockwork Chaos release on August 20, 2013. 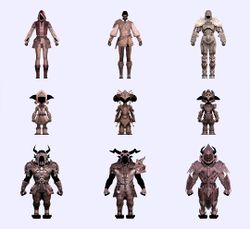 Low quality models appear in both PvE and WvW (but not in PvP, including Heart of the Mists). They are faster to draw mainly due to lower detail, and because all characters wear one armor design per armor weight, and use one body model for both male and female Asura, one for Charr and one shared by Humans, Sylvari and Norn. The bodies and armor are also uniformly tinted to improve performance. In WvW, they use the team's color.