I camped at the suggested location for hours but i still missed it -.-' As stated in notes: "The Dune Soarer does not always spawn in the exact location indicated on the map. Other locations include on top of the rock SouthEast of the indicated location. (This location can be reached either with Aspect crystals or other skills with provide high Leap, or by gliding across the canyon to the east, jumping farther up the rocks there, then gliding back to the top of the rock." Could anyone provide the images for those "other locations" please? 79.56.68.128 23:54, 2 February 2018 (UTC)

I had it spawn just south of Sparring Rock - and not on the listed schedule, but it was invulnerable, so the spawn might've been a bug? Surolam.1490 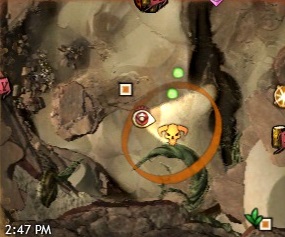