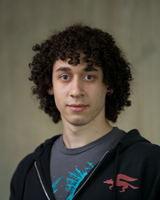 Like many of his colleagues, Jordan attended DigiPen Institute of Technology in Seattle and graduated from the RTIS program in '09. After the final summer break of his life, Jordan started work at ArenaNet of June that year. For the first two years, Jordan was on the prototype team, but then he moved over to GW2 to help up our programming bandwidth in the final year of production. Some of Jordan's first implementations were item soulbinding and the sidekicking system. For the past half year or so, Jordan has been on the WvW team and has seen it go from a small prototype to a big full featured game mode. Jordan has played on the ArenaNet indoor soccer team every season since day one.

Jordan Massey left ArenaNet in June 2014 to work as a gameplay engineer at Oculus VR.