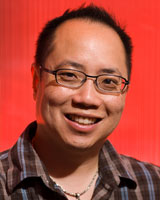 Chris Lye is the Global Brand Director for ArenaNet, but this is just a fancy name for "marketing guy." He began his path into gaming when he opened his first "blue box" Dungeons & Dragons game and he’s been hooked ever since. He’s held a number of odd-jobs including T-shirt designer, radio DJ, investigative journalist, IT guy, and Technical Evangelist for Windows. He finally "went pro" with his love of gaming when he joined the original Xbox concept team and later became the lead marketer for RPGs and MMOs for Microsoft Game Studios. Chris has worked on a wide range of titles, including Dungeon Siege, Asheron’s Call, Mythica, Vanguard: Saga of Heroes, and Jade Empire. He's forever indebted to MMOs, because he met his wife playing one.

Chris Lye was the Global Brand Director for ArenaNet until he left in 2014.