From what I can remember, its single use only and you double click it from your inventory. To activate its status, one right clicks their name in the upper corner and can have the option to start of disband the squad. It allows you to mark the map with 3 additional waypoints. From the top of my head they were "attack (something)" which was a white circle with a red X, "defend (something)" which was a silver shield, and a "rally at" waypoint which was a chevron like icon. It also shows up in the effects monitor when enabled on yourself and you can see it on the effects monitor of enemies as well. Here is what it looks like on the enemy and self status effects bar 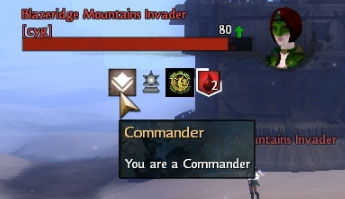 In BWE2, my friend bought it in Divinity's Reach, and he can be a Commander in PvE world! We can saw his Commander mark in the map! 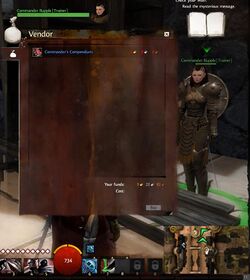 What the Icon looks like[edit]

The new cost of one is set at 100g now. Guess they dont want too many commanders running out there in the world anymore. --The preceding unsigned comment was added by User:LiquidWolf (talk).

Or you can just buy one with real money... which I would NOT recommend unless your Guild/Clan was desperate to have a Squad Leader and were PvP nuts. SabreWolf

Over a year later and more PVErs have Commander tag than WvW people. There should be a track for commanders via WvW. Luckily you can buy gems and pay for one. --Life Infusion «T» 01:12, 16 May 2014 (UTC)

Can anyone check whether buying the Catmander's Compendium first makes this one cheaper? J.Tesla (talk) 11:33, 9 August 2017 (UTC)