Today we're happy to announce that the Guild Wars 2 core game is available for everyone to play for free. With Guild Wars 2: Heart of Thorns™ launching soon, there's no better time to introduce the game to your friends.

Guild Wars 2 has the simplest of business models: buy the game and play it as long as you want with no monthly fees. We've been championing this as a great business model for MMOs since launching the first Guild Wars® a decade ago. We continue to believe in buy-to-play. It's good for gamers and good for developers.

This business model has been fantastic for Guild Wars 2 and our fans. Since launching three years ago—almost to the day, today—we've sold more than 5 million copies of the game. And we've delivered more than 40 major content releases, with world-changing events, Living World episodes, and feature packs, all free of charge.

Expansions are the one place where the buy-to-play model gets a little tricky. When you're coming in as a new player to a game that has a bunch of expansions, what exactly should you buy in order to play with your friends? The base game and also every single expansion? We've seen examples in the industry where that kind of thing has gotten out of control. It doesn't seem right, and we want to do better. As we get ready to ship our first expansion for Guild Wars 2, we want to ensure that we keep the business model friendly and simple. So let's be clear that when we say Guild Wars 2 is buy-to-play, we're only asking you to buy one thing: the current release, Guild Wars 2: Heart of Thorns.

Getting the Details Right

A game like Guild Wars 2 lives and dies by its community. Our goal is to protect our current community but also to make it as easy as possible for you to introduce the game to your friends, to recruit new players into your guilds, to challenge new players to Player vs. Player matches, and so on.

Here are the changes we made for free accounts.

First, free accounts start with fewer character slots and bag slots than the paid version of the game. But they still get the full complement of slots as soon as they buy Guild Wars 2: Heart of Thorns.

Third, free accounts have some restrictions to prevent them from skipping ahead to places where they could be used to disrupt the game. They must play to level 10 before leaving the starter zones, to level 30 before using LFG, and to level 60 before using World vs. World. They can play PvP immediately but must get to rank 20 before using custom and unranked arenas.

We've found in testing that it's hard to read a list like this and know how it's going to feel in action. All these changes are live today, so we invite you to see for yourself. Test with a free account and see that it's the same Guild Wars 2 you know and love; test with a veteran account and confirm that the community is protected.

We have an exhaustive FAQ covering these changes and other topics related to the free game, so check it out if you have additional questions. 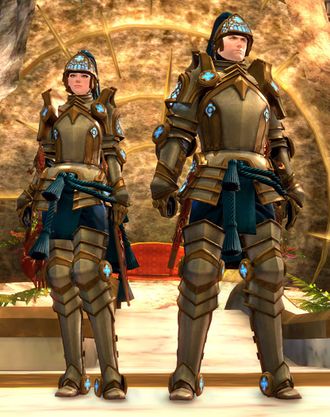 A Call to Action

Guild Wars 2 is famous for having the friendliest community in online gaming, and that community continues to grow. With Guild Wars 2: Heart of Thorns on the horizon, of course the game was going to have an influx of new players. And now, with this change, it will have a larger one. I ask you, the game's veterans, to be the friendly faces that will welcome all these new players to the game.

To celebrate this special three-year anniversary of Guild Wars 2, we're giving current players an all-new Royal Guard Outfit. Wear it with pride whenever you want to show that you were there early on, and that you're someone that new players can go to for help.

Guild Wars 2: Heart of Thorns is full of end-game content, including Masteries, Fractals, Stronghold, and our newly announced challenging group content, raids. It's coming on October 23, just 55 days from now! This is the perfect time to bring new players into your guild, to help them level up and master their professions, to practice coordinating as a team, and to prepare for all the challenges that the jungle will bring.