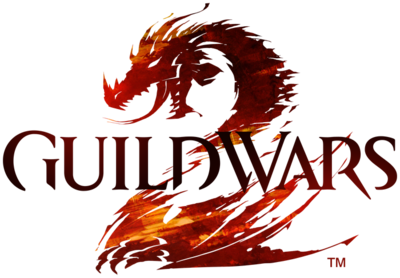 Guild Wars 2 is the sequel to the Guild Wars series of games by ArenaNet. Guild Wars 2 was released on August 28, 2012.[1] It has been in development since 2006. Many features have integrated into the game which align it with traditional MMORPGs, such as a persistent world and a level cap of 80, but the game has been described by ArenaNet as having non-traditional elements as well, because "it doesn't make you spend hours preparing to have fun rather than just having fun."

This article provides an overview of the features of Guild Wars 2. For more detailed information, consult the fan FAQ or other articles available on this wiki.

An early logo, shown in the original magazine reveal.

ArenaNet began offering playable demos to convention attendees starting with Gamescom in 2010. In each of these demos the game systems presented to players have increased and shown evolution and change. A YouTube search will uncover considerable footage of Guild Wars 2 gameplay from these conventions.

Pre-purchase for Guild Wars 2 started on April 10th, 2012 allowing players to purchase one of three versions of the game before its launch: Digital Edition, Digital Deluxe Edition, and Collector's Edition.

As of August 29, 2015 the original Guild Wars 2 content is free to play and does not require an initial purchase of the game or a subscription fee to play. Purchasable content is available in the form of expansions and episodical updates, labelled as Living World seasons, that expand the base/original game content. Guild Wars 2 has micro-transactions similar to those offered in Guild Wars.[4]

The core game can be freely acquired through the official website. Even though there is no monetary cost, an account is required to play. Free-to-play accounts have several restrictions, which are lifted with an expansion purchase. Players that purchased the game prior to August 29 2015 are considered to have a Guild Wars 2 "Core" account without the free-to-play restrictions. See guildwars2.com for further information.

There is a "Partner Program" through which new purchases at current prices can also benefit your favorite content creator. "Content creators" are those who run a podcast, fansite, video channel or live stream channel which features GW2 news, how-tos, fan-art, etc. See Arenanet Partner Program for a list of current partners or to apply to become a partner. That site includes a short video describing the partner program.

There have been two substantial expansions released, each of which was available for purchase at the time of their release.

The third expansion is upcoming and available for prepurchase.

As of August 30th 2019, Heart of Thorns is included for free when the second expansion, Path of Fire is purchased.

The currently available editions of the game to new players are therefore:

These editions of Guild Wars 2 are no longer sold by ArenaNet as of the release of Heart of Thorns, but any existing serial keys may still be redeemed. 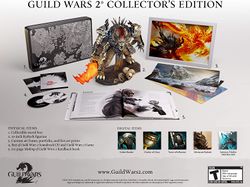 While the Heroic Edition is no longer available for purchase, codes are often distributed during online promotions or handed out at conventions as physical codes.

Digital Distribution
Two versions of the game were available in the past, but were discontinued.

A massive event was held in Beijing during the Chinese launch. ArenaNet and KongZhong took the stage alongside China's biggest stars and a 30-foot statue of Rytlock Brimstone. Jike Juan Yi, also known as Summer, was the event's most prominent celebrity performer. Summer created a music video combining live action and game play to debut a Chinese version of the Guild Wars 2 anthem Fear Not This Night

The game, which was originally released in China as a standalone client, is now distributed by Tencent via their client WeGame (as of 2020-06-16).

Differences between the original western release[edit]

The current minimum requirements for Windows[7] are:

There are two fixed aspects to any character created: race and profession.

The selection of one of five playable races determines the appearance of the character and gives a flavor to the character in combat with versatile racial skills and through a personal storyline with the unique themes and history of the race. The selection of one of eight available professions determines most of what the character is capable of doing. It restricts the armor type wearable, but more importantly determines how the skill bar is built through the unique game mechanics of the profession, the weapons that can be wielded, and the skills and ability modifiers available. The profession abilities have been emphasized over racial abilities to make sure that each race is equally able to play each profession. Professions are roughly analogous to what most other MMOs refer to as character classes.

A character can be used to play any game mode available in Guild Wars 2: PvE, Structured PvP and World PvP. A player may still have multiple characters. The game is designed to be viable for both solo and group play.

Characters from the original Guild Wars will not be migrated to play in Guild Wars 2, though some player achievements are translated through the Hall of Monuments, which grants titles and new items. Players also had the chance to reserve their character names up until the 31st of July 2012 before the game's launch. [9]

Combat in Guild Wars 2 is built around three facets: damage, control and support. Damage is simply decreasing the enemy's health, control is preventing the enemy from doing what it wants, and support consists of working together with allies. Each profession is able to perform any of these roles. While some professions may be better at an aspect than others, no character is a specialist in a particular role. For example, there is no profession which focuses on the healing aspect of support - the best healing abilities available in the game are the compulsory self healing skills.

Combat is designed to be tactical and dynamic; items in the environment can be used as weapons, body position can affect skills, and skills which allies use can interact with the player to create new effects. Players can dodge enemy attacks to avoid damage and even what is done at the edge of death can change the outcome of the fight dramatically. 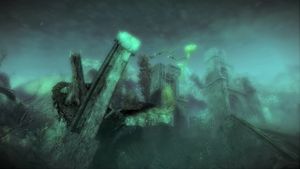 Underwater exploration is a major part of Guild Wars 2.

Guild Wars 2 has a significantly larger world than that of Guild Wars.[10] Underwater explorable areas are a significant part of some zones, some of which have over half of the area underwater. These underwater areas are designed to be easily accessible and fun places to explore for all players so there aren't any breath meters or time limits. The underwater areas have new friendly races and their own events.

Instead of a traditional quest system, there are dynamic events. As the world is explored, objectives become revealed by occurrences around the player. For example, a town under attack is identifiable by the destruction caused by enemies and townspeople fleeing. Participating in defending the town gives rewards whether the event succeeds or fails. There are over 1500 events that can occur in a dynamic system based on player action or inaction in the world. Participation in these events thus affects the state of the world (f.e. the availability of merchants). The events that occur are sometimes influenced by the latest available story updates, causing the events to change accordingly.

In the 250 years since the events of Guild Wars, the Elder Dragons have awoken. As massive forces of nature, these dragons have wrought destruction across the continent of Tyria, forever changing its face and its inhabitants. The player is thrown into the midst of this destruction. Each character has its own biography which affects the story and how non-player characters react. As the game progresses, organizations can be joined and situations approached in different ways; these influences change the experience of the story as it advances towards the final confrontation with the Elder Dragon, Zhaitan. There are therefore millions of different story permutations possible.

Much of the story between Guild Wars and Guild Wars 2 is elaborated on in the novels set in the intervening years; Ghosts of Ascalon, Edge of Destiny, and Sea of Sorrows.

Guild Wars 2 has a robust crafting system of eight different disciplines which can be changed at any time without losing progress. Leveling the disciplines is designed to allow the player to craft items for themselves as they progress through the game without grinding for specific gear types. Gathering doesn't prevent other players from also gathering from the same resource. These resources will also respawn after a specific amount of time.

Mini-game activities are provided in major towns and Lounges.

There are two main forms of organized PvP: a tournament based game with evenly organized teams, and pick-up play where individuals or groups can hot-join a map depending on a variety of settings similar to competitive MOBAs and first-person-shooters. Players entering organized PvP get a fixed level and any items necessary to ensure an even footing. 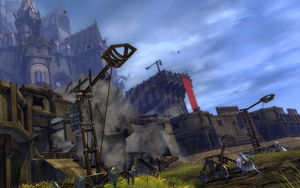 World versus World is a casual but competitive player versus player mode featuring large, continuous, objective-based battles between a few matched servers. Players of any level can come and go, using the skills and equipment that they currently have. The winning worlds gain particular benefits, such as better prices at merchants. The main goal is to obtain the most area points, which can only be done by collaborating with one another in bigger groups, as opposed to Structured PvP, which is only in a small group.

A player may link up to 5 guilds to their account and may choose which guild they would like to represent on any character at any time. Only when "representing" a specific guild do they have access to the guild bank and any other guild perks. Some options available to support guilds include guild achievements and missions. The ultimate goal of a guild is to fully extend their guild hall, which will provide them with more benefits.

Originally, the player could only read and write into the guild chat of the one guild they were currently representing. Recent changes removed this restriction so that all the account's guilds' chat channels can be read and written to regardless of which is currently being represented.

There is not a "click-to-move" control system, [14] but target-locking is available.

The game uses a 2-hour day-night cycle: day lasts for 70 minutes, night for 40 minutes, with dawn and dusk taking 5 minutes each. Some events only begin during one of these time periods, some NPCs only appear at certain times, and some food and equipment confers bonuses during either night or day. In addition, the explorable paths of five dungeons and six Fractals of the Mists always take place during the night; the others are always during the day. Maps can look completly different during daytime and nighttime.

There are weather patterns, and the interiors of many buildings in the environment are accessible. Weather does however not influence combat or movement. There are however environmental hazards that influence movement (i.e. walking slower in quicksand, slipping on icy surfaces etc.).

Jeremy Soule, composer for the Guild Wars series (and many other games) returned to compose the soundtrack for Guild Wars 2. Since the game's release, additional music has been composed by Maclaine Diemer, Stan LePard, and Lena Chappelle. Starting with the soundtrack for Shadow of the Mad King (Halloween 2012) most tracks can be found on Arena Net's soundcloud.