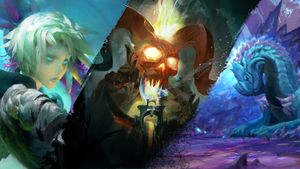 The Living World in Guild Wars 2 is ArenaNet's official term for updates to the game intended to bring the world of Guild Wars 2 to life. Updates are added in the form of episodes, grouped within seasons similar to television. Each episode includes story missions and other content that tell the story of Tyria's ongoing evolution. The episodes serve as the ongoing storyline between expansions, detailing the effects of the previous expansion and leading into the next. Although the first season of the Living World was largely temporary, new episodes were made permanent starting in Season 2 and could be replayed at any time. 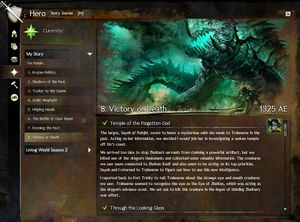 Episodes of the Living World must be unlocked in order to play them. Unlocked episodes can be accessed by any level 80 character on your account. There are three methods for unlocking episodes:

Unlike the episodes of Living World Season 2 and onward, the content comprising Season 1 was temporary and is most of it is not available for replay. Available are dungeons, fractals, and in The Icebrood Saga, a few scenes from season 1 are playable as flashbacks. Players with the Guild Wars 2: Path of Fire expansion can access them through the Scrying Pool after they complete the episode Visions of the Past: Steel and Fire.

Following the conclusion of Season 2 and the rebuilding of Lion's Arch, players can learn some of the details of Season 1 by completing the Story Journal chapter Remembering Scarlet's War.

For a summary of Season 1, please see Living World Season 1.