This article is about the unimplemented World versus World map. For the Desert Highlands point of interest, see Fortune's Vale. 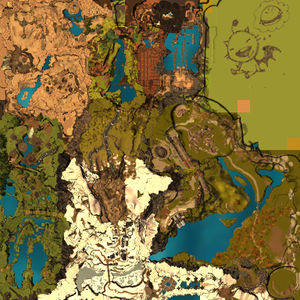 The datamined map of Fortunes Vale. 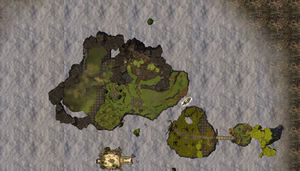 Fortunes Vale is an unused map for World versus World in The Mists that was in the Gw2.dat for only a few weeks before its removal. It was situated to the northeast portion of the World versus World maps, opposite of Edge of the Mists, though its purpose - if any was decided - is unknown. There are no current plans to bring it back,[1] but it had a series of events and voice overs already implemented before being scrapped.

Fortunes Vale was divided into various themed sections, each with their own set of foes (such as Skritt, Tree Bandits, Ogres, Karka, Dredge, "Crazed", and Elementals). The map also appeared to have been set up for three competing teams (color coded to red, blue, and green), each team set up to escort an NPC through a series of events, being: